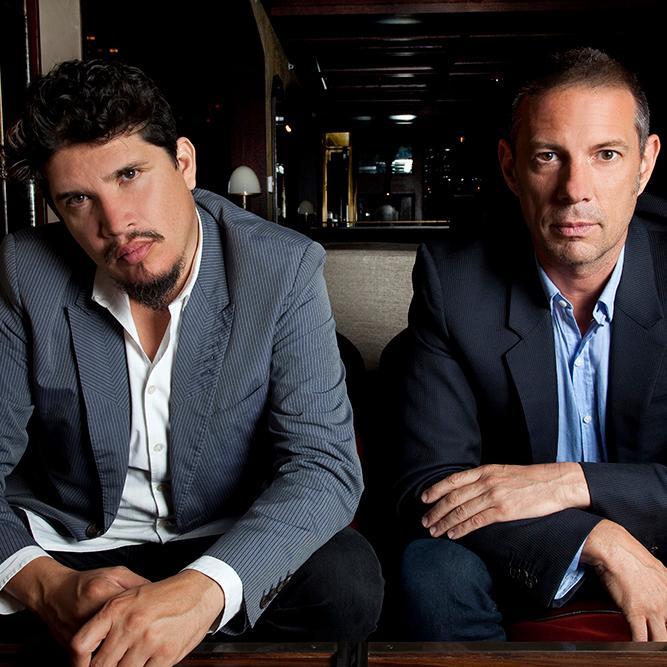 “Our deepest source of inspiration comes from our record collections,” says Rob Garza; an apt reference to their collective nom de plume. Always great admirers and curators of dusty grooves and all but forgotten music styles, Thievery Corporation borrow from the classically sensual and blunted sounds of their favorite Brazilian bossa nova, Jamaican dub reggae, vintage film soundtracks, and psychedelic rock to forge into new sonic territory. Recording at the Consulate studios in Washington D.C., Thievery Corporation have managed to blossom in the heart of the empire, a city the duo often refer to as “the real Babylon.” The group is a major presence in a scene legendary for fierce independence, musically and politically from genre-defying pioneers as Chuck Brown and Fugazi to grassroots organizations such as Positive Force and the Future of Music Coalition. Formed in the summer of 1995 at D.C.ís Eighteenth Street Lounge – the now world-renowned venue that is still a creative incubator for DC underground music – Rob Garza and Lounge co-owner Eric Hilton bonded over strong drinks, dub, bossa nova and jazz records, then decided to see what would come of mixing all these in a recording studio.

The duo caught the ears of underground DJís with their first two 12″ offerings, “Shaolin Satellite” and “2001 Spliff Odyssey” and with their 1997 debut LP, Sounds from the Thievery Hi-Fi, they had already begun to define a new genre of electronic music and connect with an international community of like-minded souls. Though the terminology has varied (downtempo, chill out, leftfield and a myriad of other permutations), they have been at the top of their game ever since.

After the warm minimalism of Sounds from the Thievery Hi-Fi, Garza and Hilton raised the production value significantly with the highly acclaimed The Mirror Conspiracy, which contained the seminal international hit “Lebanese Blonde” which was featured on the Grammy winning and platinum selling Garden State soundtrack. The next corporate offering was the conscious and thought-provoking The Richest Man In Babylon, which raised the stakes just as record bins began to be flooded with imitators. Released in February of 2005, The Cosmic Game broke new ground for Thievery with high-profile collaborations with The Flaming Lips, Perry Farrell, and David Byrne contributing outstanding performances to an album that pushed Thievery’s signature sound in new directions.

Nearly seven years after releasing their first remix album Abductions and Reconstructions, the duo released Versions, a collection of rare and sublime remixes of songs by The Doors, Sarah McLachlan, Astrud Gilberto, Nouvelle Vague, Wax Poetic with Norah Jones, Anoushka Shankar and Transglobal Underground among many others. With a nod to the Jamaican production tradition of creating “versions” of the original compositions, the 18-track collection showcased their versatility and studio production talent to transform music by a wide range of artists into sonic gems bearing the distinct Thievery sound.With the renowned club and record label, acclaimed compilations, legendary live shows, and sales of over one million albums to date – every one of them self-produced and independently distributed – Thievery Corporation are undisputed standard-bearers of electronic music, and among the most adventurous and compelling artists extant. In the words of Rolling Stone: “Together, Hilton and Garza explore foreign cultures with wide-eyed curiosity and a taste for the unexpected. Then they lock themselves in a studio and record songs that tell stories of a better world.”