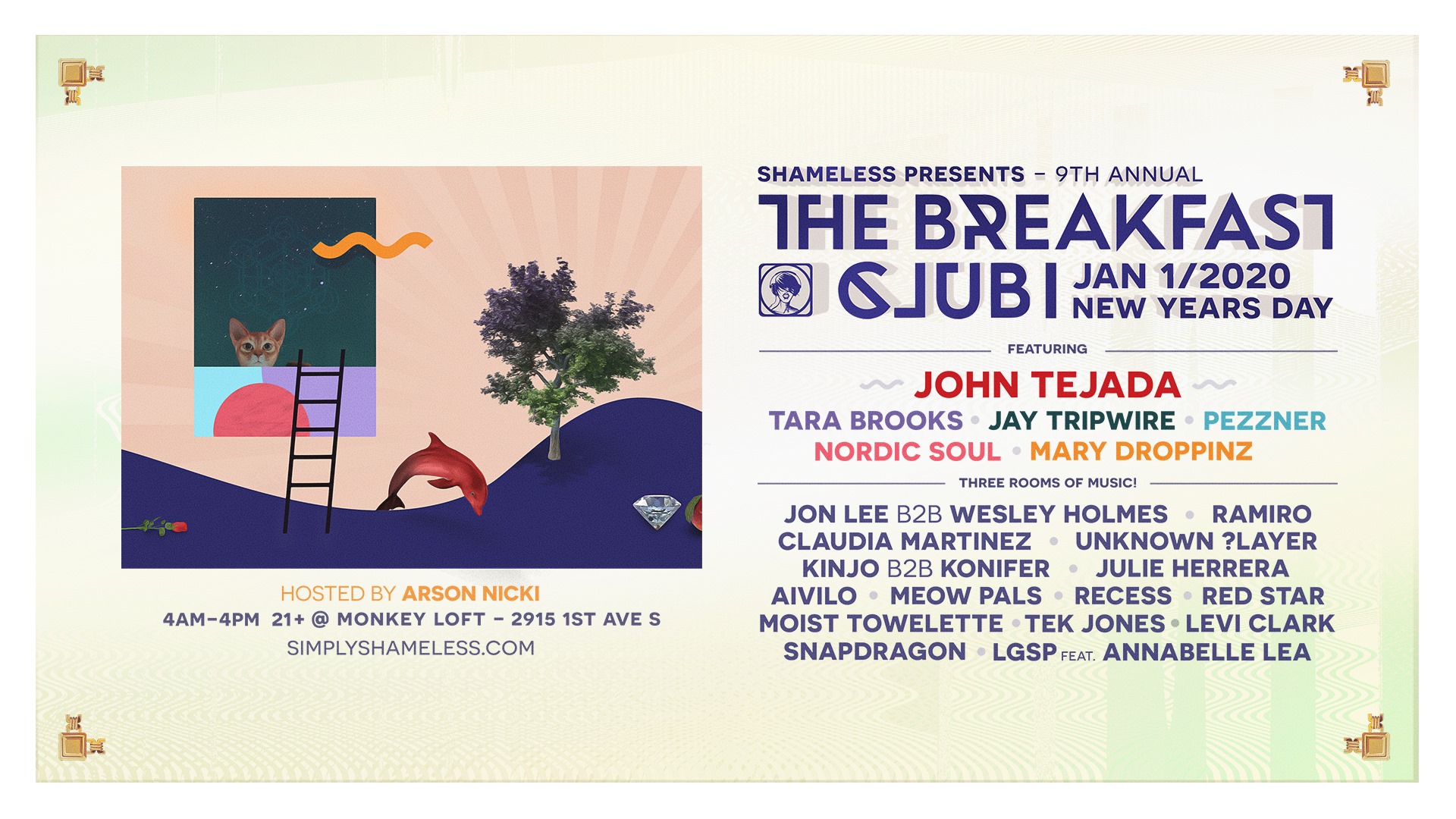 We’re back! What started at ETG has been carrying on at Monkey Loft. For the 9th year in a row, Shameless is continuing our tradition of throwing a New Years DAY party and it’ll once again take place on our favorite rooftop rain or shine. This year we’re continuing to curate 3 rooms of music to help our friends/family start 2020 off right! Just Ups & Still Ups unite!

With both his parents being professional classical musicians, it might not be a surprise that John Tejada has become known as one of the most prolific and consistent producers in today’s eletronic music landscape. Trained on drums and the piano from an early age, the LA-based synth mastermind has since amassed his own impressive skill set, embracing the music as a personal frontier, expanding on his resume as a techno recording artist as producer, remixer, DJ, and label owner. Known for crafting a brand of subtle, musical sonics, his recorded output ranges across tempo and genre lines, from chilled out affairs with spacious arrangements to pulsating, densely layered, deeply energetic tracks that work magnificently in the hands of DJs as well as on the home stereo.

Before hooking up with Kompakt, the much-acclaimed studio wizard had already made his own dent in the musical universe, thanks to a flurry of top-tier releases on labels such as Steve Bug’s Pokerflat Recordings, the legendary Plug Research imprint, 7th City, R&S and many more – but nothing prepared the world for those exquisite bangers „Sweat On The Walls“ and „Mono On Mono“, both released in 2004, with the latter being one of the most fervently beloved classics on John’s own label Palette Recordings. It’s here that John has continuously honed his skills, together with friends and long-time collaborators like Arian Leviste, Justin Maxwell or classical jazz guitarist Takeshi Nishimoto (as band project I’m Not A Gun).

Besides his work in the trenches of modules, patches and other things spelled synth, John has developed some serious DJ acumen over the years – travelling around the globe to light up renowned clubs and festivals such as Movement (the event formerly known as the Detroit Electronic Music Festival), Sonar Festival (both the Spain and Tokyo instalments), Dance Valley (Netherlands), Sync Festival (Greece), Mutek Mexico, Fabric (London), Yellow (Tokyo), Rex Club (Paris), The Walt Disney Concert Hall (Los Angeles) and many, many more. It’s somewhat admirable, then, that the man still finds time for his studio explorations – but the quality of the releases he has unleashed upon Kompakt alone (including brilliant full-length offerings and a couple of much-liked 12“es) bears witness to the musical genius that is John Tejada.

DJ-producer Tara Brooks found her calling within the Los Angeles fruitful underground dance scene in 2007 and never looked back. Tara has consistently taken her bold energy and sound to venues all over the US and abroad. She has wowed crowds at festivals such as Rainbow Serpent Festival, Desert Hearts, SXM, Coachella, BPM Festival and more as she continues to make a considerable impression on the global dancefloor community. Tara’s recent releases, podcasts and future releases of 2019 includes compelling work on Akbal, Kindisch, Balance Series, Exotic Refreshment, Kattermukke, Get Physical, Bedrock and John Digweed’s Transitions show.

[Los Angeles]
Mary Droppinz from Omaha, Nebraska currently lives in LA and is lighting up the house and techno scene.

Inspired by her fathers incredible drum skills, her Midwest roots, and love for dance – you can expect her performances to be as deep as her soul. She continues to push the limits on her musical journey to empower others and provide a space for euphoric vibrations. The only way she knows is to grow and to share the inner groove.

“Strange noises and unintelligible voices wander in and out of the ethereal tones, all things tied together by one dope hand-drummed beat. It’s alluring, to be sure, and it’s perfect for Pezzner’s first official release with Dirtybird Records.” – Billb..

David Brian Pezzner was born in Tarzana, California in 1975 and currently lives in Seattle, Washington. He is 5 foot 7 inches in height and weighs about 165 lbs. His brother, Bill works at the Port Of Seattle and has four children, two of whom are actually step-children. Bill’s wife owns a local publication and is a skilled bicyclist (even though she has not gone professional.)

When David works in his studio where he makes electronic music, his wife brings him a drink and discusses her day. The door-keeper comes in to give him a telegram sent the previous year from the Eolian Islands.

In 2010 he wrote an album of music which was released by Freerange records. A year later David’s first and only daughter, Eloise Sylvia was born. She was 5 pounds 11 ounces at birth. David spoke only English and cooked meals for his family every day until 2013 when a company called Systematic Recordings contracted him for another album.

Besides writing music for night clubs and headphones, Pezzner composes music for vision and function, and teaches electronic music writing concepts to anyone who will pay him money. He sleeps exactly like any other man but, as you will no doubt have noticed, he is not an orthodox painter of the old school, but rather a modern artist. A designer.

Always sitting slightly off-centre, Jay Tripwire is an artist that walks the line as industry staple and ever changing innovator, releasing one standout release after another.
In the early 90’s a new sound appeared, it was born of the illegal underground warehouse parties and that caught his ear were a mixture of elements of Detroit inspired Techno and Acidhouse but combined with the tempo and rhythm of house music. This is what laid the template and inspiration to Jays Djing and production.

Foremost Jay is a Dj and his craft goes back to when every party was vinyl only, He has over 20 years under his belt professionally and has toured extensively for 18 years straight with gigs taking him to over 200 cities. His finely crafted extended sets deviate from the norm and as a DJ and he encompasses a very wide range of underground music. Jay prepares extensively for every set of gigs with his personally crafted re edits to match his signature style of long drawn out blends create a rich tapestry of audio, where its not easy to tell where one song starts and the other ends.

A resident at Mr. C’s legendary SuperFreq parties and a regular contributor to the label, some of the notable parties have been at BPM festival, NYC for Resolute, and of course Fabric in London. In late 2017 a full length album for Superfreq will be released, showcasing his particular take on the labels sonic mission.

It was the early vinyl releases of Jay Tripwire that cemented his place as an originator that led to releasing over 300 vinyl records and hundreds of digital projects, his accumulated sales top well over 500 000. He has had numerous top 100 chart placements on Beatport and various other sites in the genres of Techno, House, Deep House and Tech House. Currently he has been exploring working at different tunings using 432 and 528 and writing things with certain healing frequencies in mind and his last full length album titled 8channels was the first outing in this new direction.