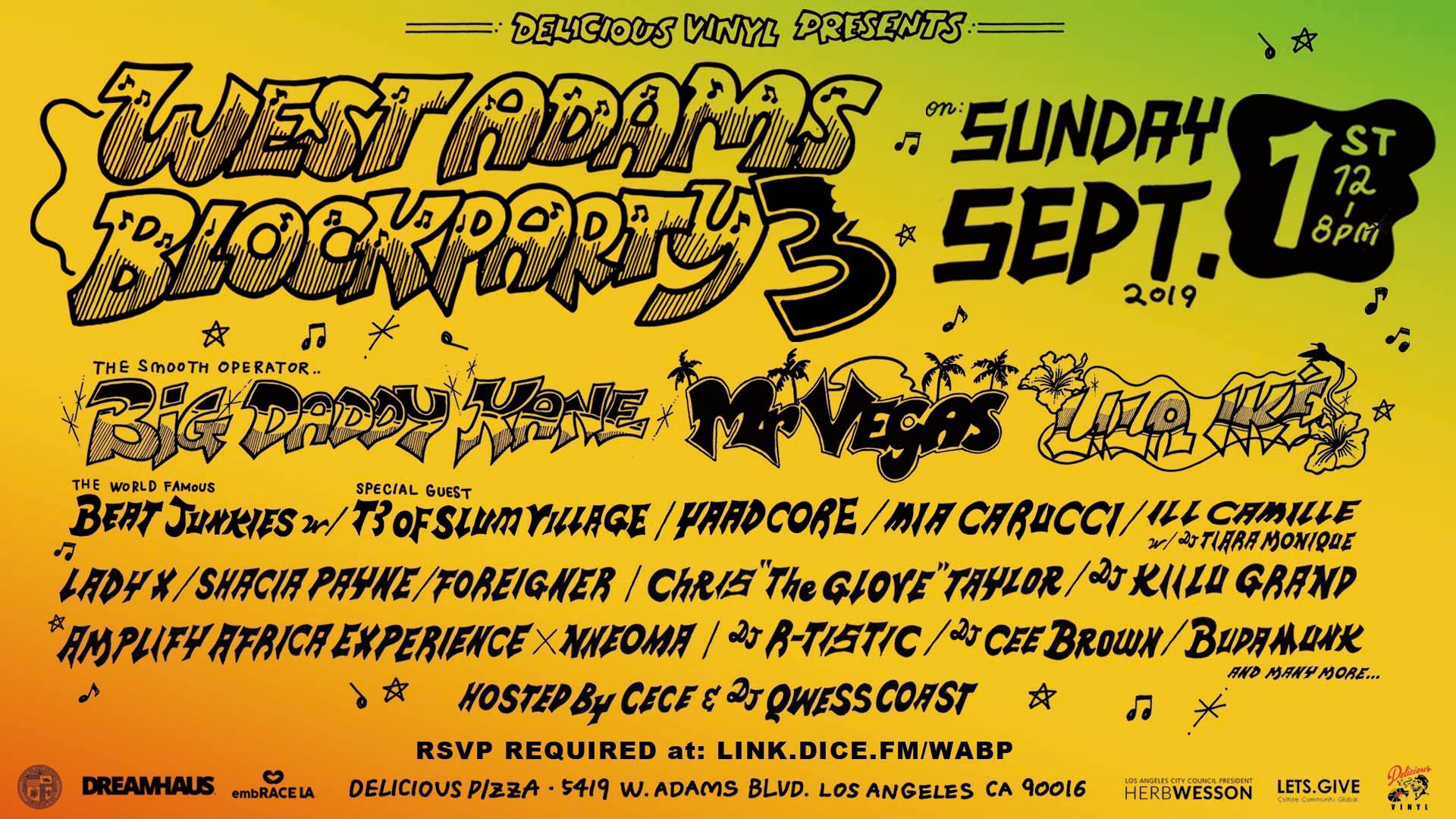 The event will be hosted by DJ QwessCoast and Cece Valencia from 93.5 KDAY and will also feature 50+ merchandise vendors and 15+ food vendors (see vendor list below).

Entry is all-ages and FREE with RSVP at dice.fm/wapb (REQUIRED FOR ENTRY).

Doors open at 12pm and the event ends at 8pm, followed by The Official After Party taking place at Fais Do Do (8pm – 2am). After Party tickets can be purchased at dice.fm/wabp2

* ALL SIX WABP STAGES AND FULL PROGRAM ANNOUNCED *
This year the West Adams Block Party is expanding from two to six official stages spread across our six block footprint (Redondo to Hauser). With over 40+ performers and music styles ranging from Hip-Hop, Reggae, Soul, Afrobeat, Funk, Dancehall, Latin Jazz, Cumbia, Salsa and Disco; there’ll be something for everyone this year. Here’s a complete break down of each stage.

FAIS DO DO STAGES (21+ / Full Bar / 11am – 2am / located on the corner of Cloverdale and W Adams)
Presented by Soul Therapy, Dub Siren HiFi, Delicious Vinyl Island, Namaste Studios, Foreigner, Fais Do Do and West Adams Family
This year we’re proud to be partnering with one of West Adams’ most iconic venues, Fais Do-Do; a gumbo of eclectic music and diverse people coming together to build a stronger community by offering exposure to new cultures, foods, sounds, and philosophies. With three unique stages and a multitude of activity spanning yoga, dancing, a funk BBQ, live music and the Official After Party, Fais Do Do will be a welcome addition to this year’s block party.
Lineup:  Scientist feat. General Jah Mikey and DJ Lady Eyela (After Party), House Shoes, Shacia Payne, Subatomic Sound System (After Party), Natural High (After Party), Mysta Crooks, Jansport J, Hitmakerchix, Zuri Aida, Roommate, Daryle, DJ Glenniest (yoga set), Wyldeflower, DJ Epik and G33ZY

* OFFICIAL WABP AFTER PARTY ANNOUNCED *
All roads point to Adams Blvd! This year we’ll be closing down the West Adams Block Party with an Official After Party at Fais Do Do featuring a stellar program of Reggae, Dancehall, Afrobeat and Soca.

* MERCHANDISE AND FOOD/BEVERAGE VENDORS ANNOUNCED *
This year’s West Adams Block Party will have our largest and most diverse selection of vendors to date (50+ merchandise booths and 15+ food/beverage trucks/booths).

In addition, Artifesto will be hosting a 4-way GetDown battle from 3-5pm. The battle will be announced and commentated by Inspired Josh and will include artists Darin, Jay2, Jackie Hernandez, and Nana. So rest those vocal chords and get ready to cheer for your favorite panel, Much More to come!

* KIDS ACTIVITIES *
The West Adams Block Party prides itself on being a free, family friendly event for all ages. Regardless of you affinity towards music, dancing, food and shopping; we’ll have an assortment of activities for the kids, including multiple jumper castles, inflatable soccer field, jumbo games, hopscotch, corn hole, board games, free kid portraits and cotton candy.

* FREE YOGA SESSION *
Presented by Namaste Studios and West Adams Family
The morning or September 1st as kick-off to the West Adams Block Party Shira from Namaste West Adams will be leading the class and DJ Glenniest will be providing the soundtrack for the yoga flow.

RSVP at dice.fm/wabp
Fais Do Do (Ballroom)
5257 W Adams Blvd

VITAL PROTEINS
We’re proud to be welcome Vital Proteins, who will be handing out free samples of their Collagen Waters, which help people feel better and live fuller lives through sustainably-sourced nutrition products, promoting health, fitness and natural beauty. They do that by providing nourishing collagen and promoting our production of collagen – an essential nutrient stripped from our diets by modern food-processing. Uncap your potential and refresh your wellness routine with Vital Proteins Collagen Waters.

ROCKENWAGNER
All Rockenwagner Bakeries products are thoughtfully handmade in our 20,000 sq ft facility that operates 24/7 in the heart of Los Angeles’ West Adams Neighborhood. From food safety & product development to customer service, QUALITY COMES FIRST. Key an eye out for the Röckenwagner tent in the vendor area.

TECATE
Proudly born in Mexico All great traditions have to start somewhere. Tecate began brewing its signature beers in the town of Tecate, Baja Mexico over 60 years ago, and hasn’t looked back since. Come join us in either the Boomyard or Fais Do Do, both of which will be serving Tecate throughout the West Adams Block Party.

DREAMHAUS LA
Dreamhausla was developed to serve as a catalyst for social change through the arts and be a home for innovation, education and creativity. We hope to be pioneers in South Los Angeles by hosting programs, workshops and events that involve our youth and fellow artists within our community.

LETS.GIVE
Lets.Give is a federally recognized 501(c)3 grassroots nonprofit, created by high school students across Los Angeles. Joined to GIVE via community, culture & global initiatives. We provide monthly volunteer opportunities to young adults, to empower and maintain a movement of love, compassion & support. Lets.Give’s mission is to connect independent minds and deliver change. We unite students and young adults across Los Angeles to create a community family to mobilize & create change.

WEST ADAMS FAMILY
West Adams Family strives to CONNECT COMMUNITY THROUGH CULTURE in the West Adams neighborhood. They do so through highlighting local artists, restaurants, educators, shops, galleries, musicians, concerts, festivals and through their own West Adams Family Function events.

HEADWRAPS IN THE PARK
Goddess head wrapping is a global tradition ranging from South Asia to Africa. It is an art form which bridges culture and displays true textile arts & craft. We are truly looking forward to our upcoming celebration on the global influence of head wraps and its beauty.

ELEVATE CULTURE PRESENTS
Elevate Culture was founded in 2002 by Los Angeles’ premier dj, host, producer and cultural curator DJ QwessCoast. QwessCoast has toured with Stevie Wonder, Nas, Damian Marley, Omarion, and Jasmine V. QwessCoast hosted Dom Kennedy’s debut mixtape “The 25th Hour”. Also, QwessCoast co-created the G Funk all stars with DJ BattleCat and DJ FM. He serves as the official tour DJ for Premier Boxing Champions on Showtime and Fox networks. QwessCoast is a consultant and production partner of the Miracle Theater in the City of Inglewood. Elevate Culture is associate producer, curator and host of the West Adams block party for the 3rd year in a row.

EMBRACE LA
Unifying Angelenos and empowering communities through a citywide conversation about race and racism to challenge and change inequities.

HERB WESSON’S OFFICE (DISTRICT 10)
Herb J. Wesson, Jr. has served as the President of the Los Angeles City Council since November 2011 and has represented Council District 10 since 2005. Wesson is the first African-American to hold the position of Council President in the city’s history and has been re-elected three times to lead the city’s legislative body. During his tenure as Council President, Wesson has presided over monumental policy initiatives making Los Angeles a better place to live, work and raise a family. Not only have local policy initiatives —which include raising the minimum wage, pension reform and consolidating city elections to increase voter turnout— positively affected local residents, but in many cases the city’s actions have spurred state and national response and served as a model for similar policies.

DELICIOUS PIZZA
Delicious Pizza is a hop-hop pizza shop founded in 2015 by father-son duo Fred and Travis Sutherland and Delicious Vinyl founder Michael Ross and brother Rick Ross. Located in L.A.’s West Adams neighborhood and on iconic Sunset Blvd. in Hollywood, the restaurant’s high-quality pies and golden-era hip-hop memorabilia has made it a destination for local residents, music fans, pizza lovers & travelers from around the globe.

ARTIFESTO / GETDOWN
Transcending limits through art & culture, one community at a time; Artifesto is a public declaration of art, providing a platform for artists to showcase their work, network with other artists, and gain recognition in Los Angeles & New York.

Artifesto’s “GetDown” is a live 2 hour paint-off battle in which each artist receives a 4 x 8ft panel to paint however and whatever they want. The winner is chosen by the audience, the loudest applause wins! The prize is a package from Blick Art Materials and most importantly BRAGGING RIGHTS!

ALTA
“On the surface, Keith Corbin’s cooking — which he describes as “California soul food” — exalts the foods of the American South: oxtails over rice, fried chicken, smothered steak, macaroni and cheese. Corbin, a native of Watts, grew up on these dishes. But his intent is also to lighten and refresh a lexicon that, as he sees it, moved away from its agrarian roots and suffers from a stigma of being unhealthy. For example, he pulls back on dairy and sugar for his take on candied yams (enriching them with almond milk and a gloss of browned butter) without sacrificing enjoyment. He seasons collard greens with vinegar, chile flakes and smoked oil and bundles them in a steamed collard leaf creased like an envelope. Miso and soy sauce add subtle umami to his oxtails, the West Adams restaurant’s finest dish. For sheer indulgence, pair the fried chicken with cornmeal pancakes at brunch.” -LA Times

JOYMODE
Joymode lends you everything you need to have the experiences you want — from everyday activities to unforgettable moments.

NAMASTE STUDIOS
At Namaste Highland Park, we believe that self-care is crucial for our physical, emotional and mental well-being. We offer a safe space and a community to practice self-care daily; with yoga, meditation, massage, energy healing and steam sessions. Check out our new West Adams location at 4971 W Adams Blvd